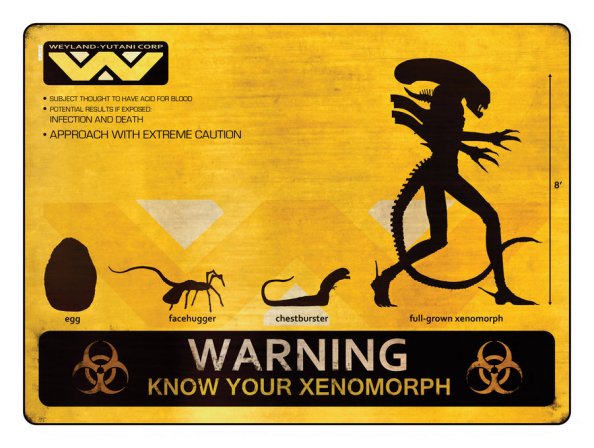 A WARNING ABOUT XENOMORPHS FROM WEYLAND YUTANI CORP

Aside from being a huge fan of the Alien franchise, over the last months I have started stargazing. Despite the endless rain we have in Kerry in South of Ireland, the night sky down here is mainly free of light pollution, that is when those clouds finally clear. Given  a fairly clear night, an hour or two without rain, a warm coat, some gloves and a bit of hot whiskey, fun can be had (sadly Im on a diet – so no whiskey). Also, and most happily, my landlord has a pretty cool telescope. We spend hours looking at the moon and Saturn and occasionally a tiny Mars appears. There are countless stars out there and just staring into a telescope gives one and incredible rush of transcendence. There before one’s eyes are actual proof of other galaxies and other planets and other constellations. Call it a Galileo (remember what happened to him?) moment but we humans sometimes forget how small we are and how vast it all is out there. I find I love to look out through a telescope as opposed to looking into a computer screen. I find it wonderful to sit out on a clear night and allow my eyes to become accustomed to the dark after countless hours of artificial light. After a while the clouds disappear and I look up.

FORMULA FOR CALCUALTING THE PROBABILITY OF ALIEN LIFE IN THE UNIVERSE

So many stars. Satellites come out at night. It’s fantastic. It’s literally a trip. Try it. Bring the kids. Bring your friends. Go up a hill at night and look at the sky. If you have a telescope all the better. But even with the naked eye looking at huge boiling stars lighting up the night sky millions or billions of light years away, is the most fun you can ever have without spending a cent. For me it’s a consciousness expanding exercise. One theory postulates that we occupy only one of multiple universes, how many we just don’t know. In this particular  universe some say there are a hundred billion galaxies. Others say its two hundred billion. Others again say there are five hundred billion galaxies. (I got these figures from a google search, so many results emerging I don’t see how I can provide links to same). When you take the difference between one and five billion, it becomes clear just how much about the universe we just dont know.  Also, I think that even if we don’t agree on the number of galaxies in the known universe we can say this. There are almost an uncountable number of them and as such there must therefore be an uncountable number of stars in the each of those galaxies. Right now its an unknown, but a immense number.

If there are a vast number of stars, then there has to be even more planets. Planets form usually from the leftover parts of stars (how planets form), so for every star, there are usually a number of planets rotating around them. Then notion then that we are alone in this incredibly vast, impossibly complex universe, that humanity and the dolphins and the great apes and so on are the only sentient creatures, well anywhere, is so vastly improbable as to be at this stage funny. Its an extension of the junk science isolationism and anthropocentrism we see pervading our culture at present, to think this universe is especially for us and we are alone in it. Though without an ET we got no proof, its also equally true its a mighty vast universe with just one planet that supports life. To me the geeks and conspiracy theorists will be proven right in time, the tinfoil hat wearing brigade talking about other worlds and alien visitations, however hilarious and at times, and, well a bit deranged, have a valid point. Its most theories that fit way outside the accepted agreed pool of belief syst

ems are treated as a bit crazy, but the more one looks out on a vast canopy of stars the more one sees, well more stars. How is it possible we are alone in all of this? Furthermore if we are alone (unlikely), why are we killing each other for real estate or belief systems? We have unlimited places out there to make a home and live in peace. If anything the wisest course of action is to recognize how limited resources are here, treat this beautiful planet with love, and set about recognizing the dangers of overpopulation, and finding new homes elsewhere rather than killing other people simply because they dont have the same god or their ideology doesn’t match yours. The truth is maybe out there?