Being a rather impressionable little boy, that is, when I was a little boy, I recall one of the most terrifying creatures of my childhood was Frankenstein, not Victor Frankenstein mind, but the Monster, or The Creature, also known as Adam, something I was reminded of by a friend. For now I am not talking about the book, but the movies. This huge bolt necked square headed silent killer that walked slowly and never stopped until you were dead was a prototype Terminator that was out to get me. Scary. Frankenstein haunted my dreams and my waking life. I had no doubt this creature existed. That scientists were building him somewhere, and that Victor Frankensteins Monster was a truly malevolent force. I became profoundly conservative in my thinking. I needed things to be safe and ordered and filled with ritual and nice middle class motifs. This was because my mind was frightening me. It was because he, the Frankenstein Thing was evil. Science was a doorway to a terrifying unknown. We should not mess with the natrual order of things.

This is of course was long before I actually sat down and read Mary Shelleys remarkable book and saw that this was not what the book was about and that the Creature was a fascinating damaged and complex being.

I mentioned earlier I was an impressionable little boy. I guess I am being a tad disengenuous. I was a scaredy cat. I was filled with phobias and terrors and oversensitivites. I had too many ideas and dreams, and I couldn’t control them or cope with them. Also I had no one to talk to about them. I had an incredibly vivid imagination and ghost stories and such like really gripped me. Frankenstein was real to me and something had to be done about it. I had to understand the monster. Getting to sleep at night became a real challenge. I tried strategies. I listened to the radio. I played music. I left the light on. I read until I couldn’t keep my eyes open. And eventually, I dropped off asleep only to see ghosts and monsters of the Frankensteninian ilk lurch out of the shadows and come ambling for me with arms outstretched and a dull empty gaze that spoke of murder.  I would wake with a start and go downstairs and drink a glass of milk or something and try to settle myself. I didnt know what to do with all these ideas and dreams. It seemed to me that the world of science, of creativity was filled with possibilities for good or ill, but it seemed also that no matter what we did, how many countless brilliant advances we made, we were always left with the fruits of our creation, our monsters, our Frankensteins. In the future there would be the mass production and corporatization of pharmacology that we have now, along with drone warfare, robot troops and police, mass surveillance, and Donald Trump. Back then in the sixties and the seventies there were science fiction novels and small indications of the future one would occassionally see on Television and the Movies. The problem was that all the top minds in the world of the arts predicted a bad end to our journey into scientific progress, despite the fact that millions of lives were being saved by science and that statistically the numbers of people being killed in wars and other conflicts were dropping precipitiously. It all made no sense, that is until I realized what they were talking about was not what science cured, but that our potential for self annihilation was now absolute. That was the real monster. Not the Creature.

One of the things that cured my terrors was the experience of enlightenment. I actually picked up Shelley’s novel and read it. Victor Frankenstein was not the mad gothic genius with a cliche eastern european scientific sidekick working in some fire and brimstone lightning filled huge secret laboratory. He worked alone. Mainly in dissection rooms. His goal was to create the perfect human, a creature free of human foibles and defects. And by all accounts he succeeded. Except like all very intelligent sensitive beings, the Creature, as it was called, longed for human companionship, for love and meaning and because it, the Creature, was isolated and shunned, loneliness and  rejection drove it insane and led to its downfall, not least because Victor Frankenstein destroyed the Creatures potential mate and condenmned it to a life of isolation an desperate meaninglessness. The Creature was eloquent, poetic, thoughtful, sensitive, and given to long philosophical soliliques. Victor Frankenstein was a classic romantic character. In him we have what is now a veritable movie and fiction trope of the lonely genius labouring to create a better world using the gifts of intellect and skill, trying to replace blind assumptons with knowledge, undermining groundless fears with the power of insight. Instead of doing that, Victor created a being that had no place in the world, a being that went mad and had to be destroyed, a lonely desperate highly gifted creature who because he was a new type of transhuman, he had no peer, no companion, no home. 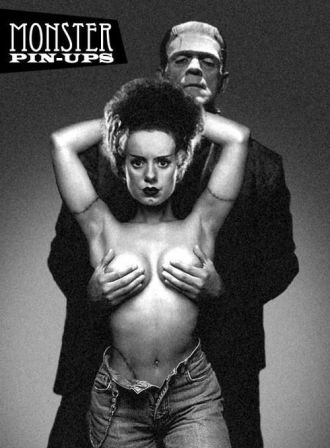 The Creatures in love

I am no longer afraid of the Creature. I feel a great sadness now about his fate. His creator, Victor Frankenstein killed his bride and left him to go mad and become a psychotic killer. Deep down The Creature dreamed of going to South America, far from everybody, and living quietly with his mate, a female Creature, someone who would understand him, share his life as an equal, drive away the sense of his unbridgeable distance from others, a distance he neither wanted nor created for himself in the first place. The truth was that Frankensteins Creation had no place in ths world. If he and his bride could take a rocket ship to the stars, perhaps he might still be out there, but alas he was a being ahead of his time, so the tragedy of Frankenstein is the tragedy of his creation. Each destroyed the other. As the meme generators on the internet so like to remind us, Frankenstein was the name of the doctor, not the so called monster.