One of the happier memories of my friend Martin Egan was listening to him both talk about  and read aloud many drafts of the poems that eventually became Sea Journey, a book that for as long as it has been in print, remains a huge favourite of mine. One of the many reasons I am penning this is the hope that it will remain in print for a long, long time and that many more will buy this excellent book. Reading it again, one can only imagine the quality of other possible tomes the poet would have produced if his health had remained as strong as his many gifts.

It is, to my mind, somewhat facile to interpret Egan’s poems in ‘Sea Journey’ as part of the ‘therapy oeuvre’, in other words a type of ventilation of ones own personal psychological and therapeutic experiences in poetic form, a kind of art therapy, or an exorcism of personal demons. Such types of poems, of course, have their place, as there really can be no limits or no rules for the material any artist uses for their art. In reading this complex, very humorous and tragic work, it is clear that Egan goes further, much further, than using art a 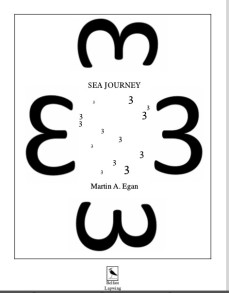 s a type of therapy. Firstly there is no attempt on the artist’s part to employ any psychological categories in his descriptions depictions and storytelling. In fact, if anything Sea Journey travels into territories uncharted by either the recovery or addiction or abuse experience, three themes that, among others, also happen to populate the pages of the volume as a kind of marker on the road to his central theme. In the poem Middle Aged Rant, he complains he has been ‘more Psychoanalysed than any other single Middle-aged Man’ and that despite these explorations of his own addictions, obsessions, and family of origin issues, he doesn’t feel better, more resolved, or indeed nicer to children or small animals.

To linger for a moment on the therapeutic question, seeing as it is visible in Sea Journey, it might also be well argued that it is really not the job of therapy to provide answers to the questions of the meaning of life. It might equally be argued that the job of any therapeutic endeavour to bring us rather to the doorway of moral choice. To this question we need to look at the whole thrust of Egan’s endeavour in the book Sea Journey, for Egan constructs a complex moral backdrop to his artistic journey. His work is, among other things, a coruscating repudiation of the inauthentic life, meaning a life serving the needs of the ego, or the view that the achievement of fame or fortune or power or celebrity as a mark of a well lived life, or indeed any mode of existence the leaves us with an unexamined life.

“…I can smell them coming

These days from quite a ways off with their

Queen Bee’s ass in a hive…”

Egan’s many forays into various disciplines, be it song-writing, painting, poetry, singing, all of which he had considerable and much celebrated expertise, seems to have left the poet with something of a distaste for the ego driven success obsessed, so called stars ‘…famous people that think they are the shit’ (ibid). This is a world he journeys away from. The question remains as to where he is going, and the answer is this: we are going inwards and we are going downwards. Into a ‘terrible experience of loss and separation’ (Sea Journey)

The sea, the first word in the title of this volume, is long understood as a symbol of the unknown, the unexplored and the unconscious, and this is precisely where Egan takes us, into the world of pure consciousness, of memory and experience, all delivered to us largely in clear unadorned language. An artist with his technical skills could easily have delivered poems written in what we might term ‘high prosody’ using well-honed forms that have adorned the pages of countless excellent books of poetry. But his is a different agenda. Egan keeps it simple. Its all very rock and roll. Three chords and the truth. With him we get on the craft and, like Kurtz and Dante, we go down, down, deep into the undergrowth of the mind, the very heart of darkness and we look therein to find a world where there be 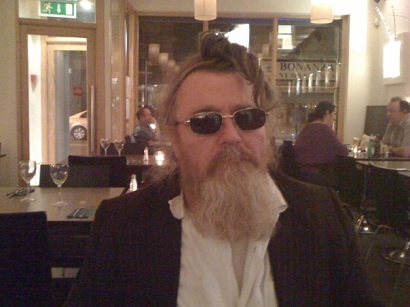 monsters, monsters that exist inside Egan, so he confesses. Monsters he sees in himself and he can find no redemption from it. ‘For myself, I never felt anything. But a gaping hole in my middle, Never saw God, or found Nirvana’ (Light Show) And this is how and why Sea Journey works. The idea is simple. The truth tells its own story. But the truth is hard to find, for we are always trying to deceive ourselves. Aside from the beauty and the clarity of the language there is a coruscatingly, at times unbearably honest depiction of his life and his relationships and his family experiences. This is the sea-journey, the second part of the title. We are going somewhere and as we go on its darker and scarier. But we don’t get lost. We don’t get lost only because we are in the hands of such a crafts person like Martin A. Egan. Our little bark does not become shipwrecked in a morass of solipsistic self-analysis, self-pity, self-loathing, and other dangerous obstacles to insight. Despite experiencing these emotions, these sirens, he ignores these comfort zones. This is where its at:

‘We became the haven for designated nutters

It was true that we knew, damn nearly next to nothing

Well, certainly I didn’t, I was always the best-read social cripple

In the marquees…’ (Light Show)

Humour is the ship we travel upon in this terrible land as we visit the worlds of drunks, addicts, rapists, wife beaters, adult survivors of child sexual abuse, and that one devastating poem about the suicide of Egan’s sister, someone he writes he hadn’t seen in decades, save for a brief somewhat dysfunctional meeting:

My brother told me,

She had killed herself.’ (Cowardice)

There is nowhere one can go with such devastating information. With every great tragedy there comes the accusations, the self accusations, and the search for someone or something to blame. A great void of sorrow and regret and sometimes irrational guilt, survivor guilt, opens up in one, and lasts for years until slowly the freeze begins to melt and life begins once more. But there is none of that in the work. Egan’s work remains dynamic. The effects of this tragedy are described, but the object of description remains clear and crisp as a fresh photograph. The beauty of the prosody is arresting:

All I can and ever will remember

Are the red and white roses

My older brother and I placed

On her coffin in the grave.

The coldness of her face,

Staring at her perfect teeth —

And Egan carries on, as a true Beckettian (which he was) he knew the essential paradox of living – the tragedy of it, or rather the tragicomedy of it. Like Beckett, Egan knows one just can’t go on, and yet one goes on. He weeps at such honest beauty and, breathing deep and free (Candle), he seeks some type of redemption in saying it like it is, which is the job of the artist. In this he can feel a small margin of freedom. There is, according to Egan, no escape from living, nothing but the pure gift of the now, a now that has to be accepted, and despite all the pain it might offer, be embraced. Years spent outside contemporary society, failed marriages, failed relationships, lost loves, friends who came and went, loves that stayed, life on an island painting, song writing and time, so much time spent in the company that, like the writers, existed along the fringes of society. But he remembers it all. He remembers it and he celebrates it all here. ‘The tone of life, powering Soaring through my bones’ (Closure).

Like Patrick Mc Cabe, Mary Morrissy, and others, Martin Egan occupies and interesting and controversial place in Irish Literature and consciousness, whereby he recalls and embodies in his work some of the darker and more painful aspects of our cultural and societal past, the legacy of sexual abuse, addiction, family dysfunction. His work has the feel of seedy bars and dark rooms and squats where people, lost and at the very edge of things, huddle together and talk – but also that arrestingly beautiful and yet simultaneously desolate rural landscape where there is only the free air and a sense of no escape from a life that is going nowhere. This is the case, but Egan’s work captures more than anything the sheer tragedy that can visit individuals and families, and how that tragedy can with courage and humour and be both coped with and not consume one.

Beautiful prosody, searingly honest, very funny, and a gripping read, this is a must have for every lover of superb Irish poetry.

I finish with a few words from Dennis Greig, publisher from Lapwing poetry, speaking about Martin’s work. As I was writing this with no access to my library in the midst of metre deep snow in the south of Poland, he very kindly made the text available to me.

“For me, Martin’s poems depict some aspects of ‘our’ immediate post WW2
generation, the rebellion against statutory dictatorships as in Ireland and the UK etc., which in themselves curtailed liberty and social organisation. Unfortunately,
the hidden powers of educational institutions, religions and global capital
still have effect on all our lives and liberties. Martin was, like myself,
something of an outsider in the thick of things.”

You can get Sea Journey HERE