One of the most refreshing and unusual pieces of television I have seen is the strange story of Olive Kitteridge. An HBO mini series based on the Pulitzer winning book by Elizabeth Strout, Olive (Mc Dormand) is an interesting character to be sure. Sharp tongued, incredibly witty, dismissive, self contained, cerebral, self reliant, she is an unpopular and foreboding character in the neighbourhood of Maine, US where she lived her life.

Olive is most likely clinically depressed (her father committed suicide). She is married to a loving kind intelligent humorous man called Henry, works as a maths teacher, is world weary, misanthropic, and deeply irrevocably bored. Henry, though not quite comprehending the full complexity of Olive’s detached, acerbic, cold disassociation from any kind of emotional life, still loves her. It is a complicated love each has for the other, involving much compromise, excessive personal space, denial, and suppressed anger. Both their love for each other also covers over their desires for a more compatible partner, the confession of which occurs under the intensity of a near death experience for both of them. Olive pines for a witty intellectual Jim O Casey (who dies in a car crash), and Henry secretly longs for other, more emotionally available women (a young widow who ends up marrying another man). Perhaps more than anything, aside from the depression she endures, is the fact that Olive never achieved anything that actually fulfilled her. She is more a blocked force than a spent one. Filled with much intellectual energy, and yet afraid to act in a world she has already depressively rejected, Olive hates herself and yet cannot forgive the foregone conclusion of her own failure.

Depressingly, she remains on the periphery of her own life, a person sitting watching her life quietly drift away. She is bored, bored beyond any possibility of feeling anything other than a sense of gathering annoyance with the world and what she perceives to be irrevocably absurd, and behaviour that is vain, selfish and cruel on the part of humanity. Death haunts her – her fathers death, the suicides of friends she tries vainly to save, her own death and her longing for death. Surrounded by the absurdity of death and clouded by depression she seemingly sits close to edge of oblivion while simultaneously scoffing at it. The anger she feels against herself is equally directed at persons, family and those unfortunate enough to cross paths with her. Exacting, angry and jealous – she is nonetheless capable of acts of tremendous compassion. She understands depression,understands that the condition has in many ways shaped her personality. She sees it in the behaviour of other self destructive depressives. She saves many people from ending their own lives, as well as spotting someone accidentally falling into the sea. But nothing, no altruistic act gives her joy or leads her out of the cell of her isolation and frustration. She sees time as the worst enemy. She watches the years pass. She watches one cycle of life ends all too quickly, meaninglessly replaced by another. And Olive feels her own time passing by. She wants some meaningful connection or to do some meaningful action. But she cannot. Whether if a fear of being in the world breeding her depression, or whether it is depression holding her back, it seems she is doomed to forever remain frozen in a kind of amber of unfulfilled desire. 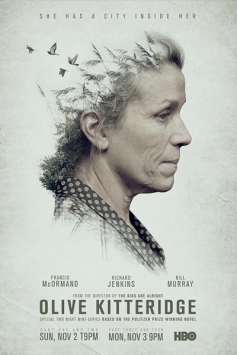 her own inner void swallows her (it always does) and she reaches the point as an old woman that she wants to kill herself. And yet she cannot. Children playing in the woods interrupt her suicide attempt, and she snaps out of it and has something of an inner breakthrough. She had reached her lowest point and there at that point she discovered a place of self belief she never hitherto known. The world remains utterly incomprehensible, pointless, and yet it is somewhere she is not yet ready to leave. And she watches birds fly off. A wonderful mini series that looks unflinchingly at untreated depression and the ravages of suicide on the lives of others, and a deeply touching examination of an unfulfilled life, Olive Kitteridge is simply a gem – and I haven’t read the novel – yet.