I believe in blogging. I am often shocked what other bloggers endure in order to keep on blogging, in a forum wherein one supposedly can engage in some kind of free expression. The most obvious one is that of the Saudi Blogger Raif Badawi who was recently sentenced to 1000 lashes in Saudi Arabia for ‘cybercrime’ and ‘insulting Islam’. Word has it Raif Badawi will now be tried for apostasy, which carries the death penalty. I did not realize Islam was so sensitive to criticism. In point of fact, I do not think it is, that is, normally speaking. Generally speaking any belief system that inflicts this type of extreme punishment against its dissidents is somewhat doomed. History is littered with examples of failed purges.  Anyhow Islam is a rather fascinating and magnificent system. Personally I don’t believe a word of it, but some of the finest cultural artistic and scientific advances have occurred within the context of Isalm, including the glorious invention of beer (which came not from Saudi Arabia which is our topic right now, but Iraq 4000 years ago, and developed there from through Islam) But to return to Saudi Arabia, it is not a country a secular atheist writer might feel the warmest of welcomes, seeing as it thinks little or nothing of administering rather brutal punishments on those whose views it violently disagrees with. There are other examples of Islam doing such things on unbelievers, many others like this. According to Sarah Anne Hughes (communications assistant for the American Humanist Association.) She writes “Recently in Bangladesh, the government removed hundreds of online posts by seven atheist and secular bloggers who “defamed Islam and the Prophet Mohammed,” according to the AFP. The country’s Prime Minister Sheikh Hasina pledged to punish the bloggers who spoke against Islam. So far, four bloggers – including one who openly identifies as a “militant atheist” — have been arrested and now face up to ten years in jail if convicted of violating cyber laws.” (read the article in full here : http://americanhumanist.org/HNN/details/2013-04-atheist-discrimination-the-weird-and-serious-ways-no )
I of course have no personal or spiritual interest in Islam, nor any faith, aside from enjoying the Koran the few times I read it. Faiths have been rooted out and destroyed and recreated in numerous indeed hundreds of forms throughout history. But that is another issue. Its also true in my experience that not one of the Muslims I interact with have ever espoused such extremist views as what one reads about. In ways it seems almost like an exercise in Islamophobia to read so many negative stories about the faith of Islam so often in the press. That being said, it’s outrageous to see fellow writers, or indeed anyone persecuted for their basic human right to free expression as freedom is freedom to express the self without harm to another. Given the crooked and labyrinthine world of the internet, it’s inevitable too that divergent views of all kinds will emerge in even the most narrow and repressive of regimes given the rise of blogging, a medium extremely difficult to control, and largely out of the reach of governmental control. Think of how easy it is to respond to, or write about the contents of another blog or post, for good or ill.

Torture, imprisonment, lashes, and religious or political police who take your ideological and doctrinal temperature and make of you a spy upon your neighbour or family is one way of controlling the minds of a population. It is quite effective, and the more bloody and brutal and spiritually inspired, its more justified. During the middle ages, for example, the justification for such torments inflicted upon Christian schismatics and unbelievers was the blessings of confession and forgiveness and as a consequence, the glories of heaven and the joys of God’s presence in eternity. But you can’t have that in the West. Firstly that’s just not legal, unless one whisks a suspect off to a black site injected with some kind of anesthetic and hooded where he or she can be tortured far from the inconveniences of the Geneva Convention, tormented and broken in peace, that is, until they confess their sins. Outside of purely political ‘terror’ suspects you just can’t do that to the general public. People ask questions. If you have them by their minds, their hearts and wallets will inevitably follow. Anyway by an large torture doesn’t work. Torture is an instrument of power. It doesn’t change your mind. Secondly we have the problem of the internet. It doesn’t matter how many people one questions, word spreads at the speed of light. For instance this picture was posted on Facebook and received seventeen thousand views and forty nine thousand shares. Facebook, like the NSA and MI5 and all the other governments involve in the intelligence community, keep count of everything. 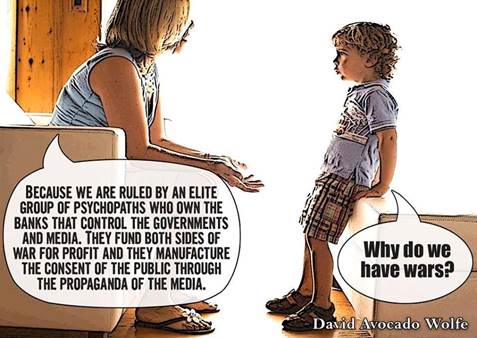 Not exactly a political view an establishment superstructure would want propagated through the online community. Of course this is easily dismissible as merely a witty meme filled with politically apt language, giving something of a left of center conspiracy theory on the operations of a worldwide governmental military industrially manufactured control structure, a worldwide governmental conspiracy to spy on our every online move, that and just about every aspect of our lives, generate wars, and manufacture our consent to the status quo, whatever that status quo might be at any given historical juncture. Yes I expect one could dismiss it, if it hadn’t been proven by Edward Snowden’s revelations. If we don’t believe that Big Brother is really watching us, if we don’t believe that enemies are manufactured for the purposes of waging war to increase governments market share, if we don’t believe that we are given just enough education to be controllable, then we are simply ignoring the evidence that has been presented to us. We simply have not been paying attention and the lessons of history are lost unto us.

But surely bad people should go to jail? Yes. But only after a fair publicly accountable trial, not a mafia style hit by Special Forces in the dead of night.

Which brings me back to the importance of us all keeping talking to each other. Blogs help. Online communications help. The idea is that ideas matter. We need something to change our minds, and each of us has a unique perspective and that unique perspective has the ability to open other people’s minds. The best communication of all is face to face, physical meetings and physical confrontations, not that the gift of the internet has not been a good thing. So belief systems should be harmed by these blogs. And the more the merrier. Lets keep talking.