which is clearly not the case. Here is a picture of my ten week old puppy and she is zipping round our rented cottage like a pixie on amphetamines. 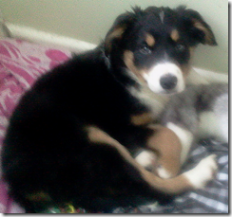 Charlie never so much as laid a tooth on the little creature. To accuse him of doing such a thing (as I implied in the title) is to cause Charlie grievous offense as Charlie is an animal lover and he used to regularly play with my puppy, who is quite the looker and is extremely well socialized, gentle and very playful, thanks to Charlie. In a sense I am way out of line accusing Charlie of puppy eating. I know the truth about Charlie. I know he is a good man, or I thought I did. And here I am flagrantly violating his ‘good’ name, and knowingly doing so, which is a low blow. The idea that I am free to spread lies about Charlie, to upset him with impunity, to ruin his life, simply because I have the power to do so is horrible. It is a monstrous act, especially because Charlie knows I write for a living, and I can sit here and fabricate things about him that might even sound credible. So I guess I am not free to do what I please. In fact I know Charlie spends his time rescuing animals and is a militant vegetarian. He believes deeply in animal rights. This of course adds hugely to the insult I am perpetrating on him if I were to write the Charlie Hebdo Puppy Eating Story. I think over the damage I am doing to his good name. I am attacking one of the pillars of his ethical stances. Its simply not on. I cant use my freedom to exploit another’s personal space, right to a good name, or in any other way hurt him, simply because I can. There is a core of natural rights belonging to Charlie Hebdo (and everyone else) that prevents him from being subject to my puppy eating accusations.

But then something happens in my long and warm friendship with Charlie. There is a room in his house I can never get into. Its always locked. I am a curious man. One day I find the key. Its filled with Nazi Paraphernalia.  I discover current membership cards for extreme far right organizations espousing xenophobic, racist political views. I make copies of the room and the cards and whatever else I can find just for the sake of having evidence. But it doesn’t matter. Deep down I am crushed. My bitter disappointment in my friend leads me to write a novel about him, this warm hearted charming fascist racist bigoted friend of mine. It sells five million copies and I am rescued from complete financial disaster.

But success is not without its suffering and its cost. Charlie sues me for defamation of character and loss of income (he lost his job after his party membership was revealed). Charlie and I are no longer speaking of course. He has put up his house for sale as he used to live near me. He wrote me a long bitter letter telling me what a terrible egomaniacal person I am and how little I care who I cause offense to so long as I can profit from the views of others. These views are private Charlie tells me. These views, Charlie says others have the right to uphold. After all, he says, he wasn’t hurting anyone holding these views. Millions hold these views. My novel sparks a huge debate. I didn’t actually think very much of my novel. I thought it was rushed and written with fire brigade emotions in my heart.

Oh, I forgot to mention the death threats. Charlie’s friends are going to kill me, my family, and my puppy. They are part of the same far-right groups Charlie was a part of. They nailed a dead cat to my door last night. Maybe Charlie had a right to his views. Maybe I should have left well enough alone.  Maybe I will survive this attempt on my life. Maybe the next time I write something, it will get me killed. I don’t know. I am not writing anything that is untrue. I am an enemy of extremism. I use my gifts to pillory the stupid, the bigoted and the downright dangerous. I cant help myself. Its who I am. I don’t discriminate between who I choose to satirise and those I exclude. After all Last time I wrote about Charlie Hebdo. And Charlie Hebdo was a long term friend of mine.