Just before 12pm on the 9th of August, a security camera caught Michael Brown (6 feet 4 inches (193 cm)) stealing a box of cigarillos not far from Canfield Drive, Ferguson, Miss., and assaulting and intimidating a shop assistant. The police were called. At 12.01 Officer Wilson saw two males walking up the middle of Canfield Dr. and asked them to get off the middle of the road. These were Brown and his friend Dorian Johnson. Accounts differ as to what Brown said to Wilson. Suffice it to say that Wilson asked Brown to get off the road and Brown refused, citing that they were nearing their destination. Wilson drove on, then reversed right up to Brown and Johnson, realizing Brown matched the description of the Convenience store Cigarillo thief. There then followed a fight, with Wilson still in the car unable to exit it. So Wilson is fighting with Brown who is leaning into the car. Wilson (6 feet 4 inches (193 cm)) is being punched by Brown. Wilson is fighting back and Brown and Wilson are each struggling for Wilsons service weapon (a 40 Caliber Sig 229 [13 rounds, 12 in the magazine, 1 in the chamber]).

Wilson said he feared for his life at this point. Wilson pulls the trigger four times. Two shots go off. One misses. One bullet hits Brown in the arm. Brown and Johnson flee. Johnson hides behind a car. Wilson gives chase to Brown. Accounts differ as to what happens next.  Wilson calls to Brown to stop. Brown turns facing Wilson. Brown moves towards Wilson. Wilson calls to Brown to stop. Brown keeps moving towards Wilson. 10 Shots go off. 6 bullets hit Brown, who is unarmed. The final shot, which penetrated the middle of his skull, kills Michael Brown.

Exactly how far Wilson and Brown are from each other at this point is again open to interpretation. the overall distance travelled from Wilsons cruiser to  where Brown fell dead is 153 feet (45 Metres). Less than 90 seconds pass from the initial altercation to Michael Brown’s death.

The incident sparked enormous public outcry and a huge series of demonstrations, both peaceful and violent, and much public discussion about longstanding accusations about police racial profiling. Peaceful and violent riots ensued in the area. An FBI civil rights investigation is underway.

Witness testimony on any incident is subject to the Rashomon effect. The name, coming from the Akira Kurosawa movie Rashomon (1950), is about how a crime is described four different ways by four different witnesses. This is the notion that anyone witnessing any particular incident is subject to bias of one kind or another or an inability to properly see something for what it actually is. The following image is from PBS and asks a list of questions.

(If you have difficulty reading the list below, then right-click it and select ‘open in a new tab’) 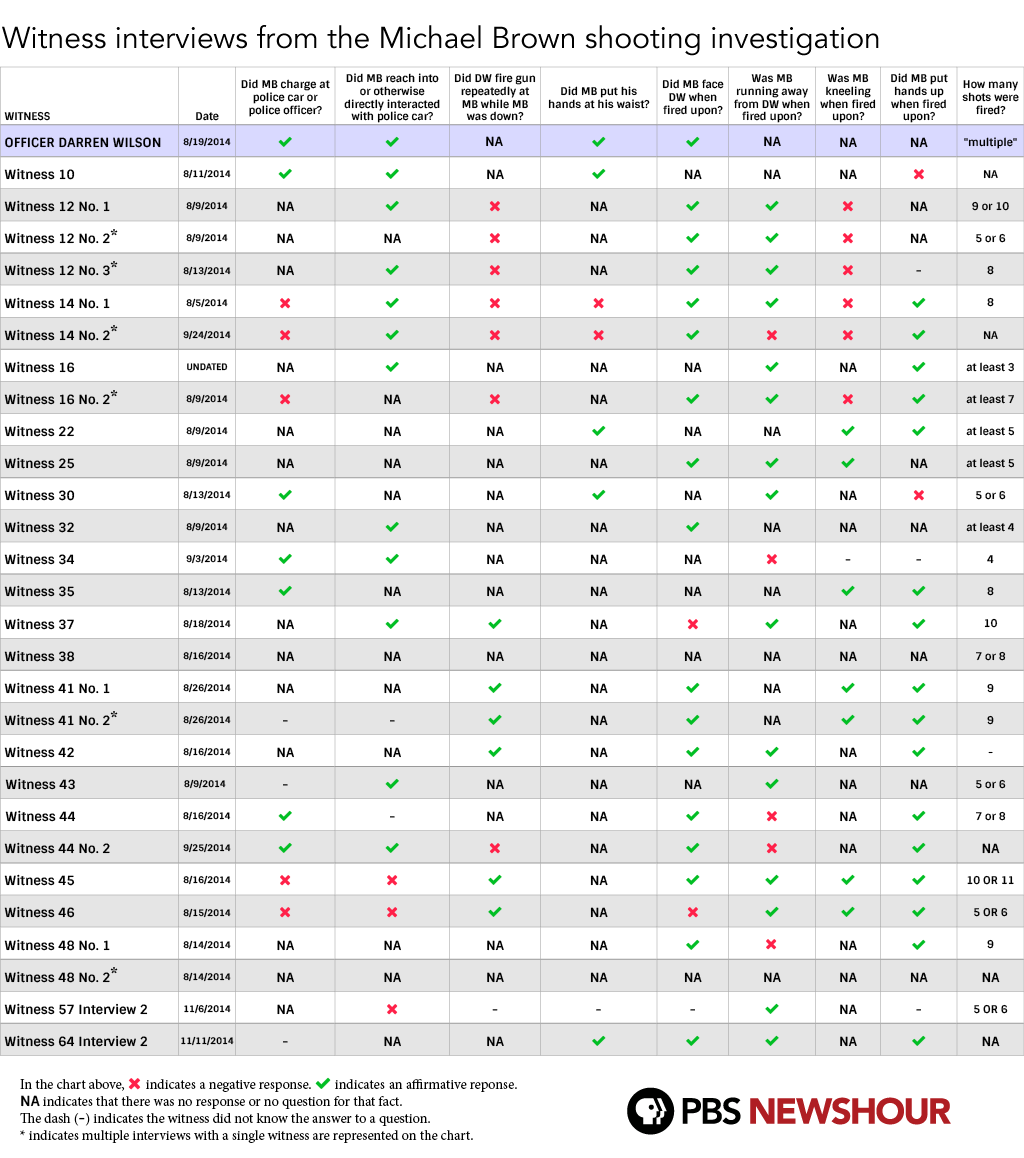 Some witnesses say Wilson opened fire as Brown ran away, then shot at him after he turned. (This is unlikely as the shell casings were all found in or about 2963 Canfield Drive.) Some say Brown had his hands raised and the final shots were murder. Dorian Johnson, Browns friend, claims Brown shouted he didn’t have a weapon and for Wilson to stop shooting. A construction worker at a nearby apartment complex disputes the claim that Brown rushed Wilson, saying it wasn’t a ‘bull rush’. Cell phone video obtained by CNN depicts the same construction worker at exactly the time of the incident shouting that “He (Brown) has his fucking hands up!” Others dispute this.

A police officer can use lethal force subduing a subject in the USA under two circumstances (1) To protect their life or the life of another innocent party” — what departments call the “defence-of-life” standard. (2) To prevent a suspect from escaping, but only if the officer has probable cause to think the suspect’s committed a serious violent felony. (Framework USA Supreme Court decisions laws – 1980 — Tennessee vs. Garner / Graham v. Connor — set up a framework for use of deadly force by police)

Wilson believed his life was in danger when Brown was punching him and twisting his gun from him. The notion that someone would reach into a police cruiser and start fighting with a policeman for his weapon is somewhat incredible, but possible. Nonetheless Wilson appeared to have suffered minor bruising on his face rather than the savage pummelling a series of blows from a 292 pound (132 kg) well nourished18 year old teenager in the prime of health would have given him. After Brown and Johnson fled, Wilsons life was no longer in danger. Wilson states he felt Brown was going to kill him during Wilsons 156 foot chase of Brown. He claims Brown went for his waistband with his injured right hand as if he were going to draw a gun on him. This is another odd aspect to the story. If Brown had a weapon, why didn’t he draw it after the shooting started right by Wilsons cruiser? If Brown had a gun and saw Wilson was going to use his, why didn’t he draw down on him? (okay not a fair question). Also, why didn’t Wilson give chase in his cruiser if he felt his life was in danger? Why didn’t he (Wilson) wait for backup if he felt his life was in danger?  Why didn’t he try to cut the two Teenagers off using his car in order to save time and increase his response time? When the shooting started, why didn’t he (Wilson) shoot Brown in the legs rather than the more lethal torso or final deadly head shot? Wilson was the trained professional. A few nonlethal legshots would have stopped even the bulk of a Michael Brown. The story doesn’t add up.

The most controversial aspect strangely enough isn’t the shooting but the subsequent Grand Jury which after many tense near announcements and agonized waiting on the part of the public and the Brown family, finally gave its announcement not indict Wilson. After so much testimony not to indict on any charge from second degree murder to the lesser charge of excessive use of force is very strange. it sparked further outcry and more public demonstrations. A Grand Jury  usually meets for about a day or so to decide whether or not the main suspect involved in the shooting (Officer Wilson in this case) has any case to answer. Usually police officers or specialists involved in the investigation are called as witnesses. The defendant usually is not asked to testify, and the prosecutor (Robert Mc Cullouch in this case) usually provides a range of charges that the grand jury needs to indict.

In this instance none of this happened. As the joke goes, a grand jury would indict a turkey for Christmas. This particular grand jury met for 25 days over three months.  Wilson testified for four hours, and over forty witnesses were called, and they bizarrely decided not to go to trial. Then the court documents were released by Mc Cullouch after the grand jury decided not to indict. Usually the evidence is kept secret for a possible trial. Mc Cullouch’s functional definition of a Grand Jury, being to determine probable cause to indict, seems contradict itself. It seems to have gone further than that and drifted into a trial itself.  The job of a Grand Jury is to enquire into the foundation a charge is made, not to analyse and look into a defendants exculpatory evidence. Finally (as far as memory serves) in the USA the last date figures are available for Grand Juries is 2010. In 2010 there were 16,000 Grand Juries. Of those only 11 decided not to indict the accused, which puts the Wilson Grand Jury into some kind of perspective.

Darren Wilson is resigning from the police force. It is unlikely he could continue to be a police officer in the area after the events of August 9th 2014. Ferguson Police Dept. will conduct an internal investigation to see if Wilson’s conduct was in line with policy, according to Ferguson Police Chief Tom Jackson.  Finally the National Bar Association is questioning how the Grand Jury, considering the evidence before them, could reach the conclusion that Darren Wilson should not be indicted and tried for the shooting death of Michael Brown.

Me too. From firearm charges to the use of excessive force to the degrees of manslaughter charges, there appears to be so many questions unanswered, so many reasons why this should have gone to trial. Whatever ones political leanings, the facts have a tendency to speak louder than ones emotional bias. That Officer Wilson is not at the very least given the opportunity to answer charges in a fair trial will lead to more bad blood and more racial tensions in this strange and tragic case, that is representative of an underlying problem of racial profiling in the USA. The Wilson-Brown case has all the appearance of a damage limitation exercise. I shudder to think what will happen if another youth is killed in a similar way.