Breaking Bad is a television show that has won basically every award worth winning and every accolade worth giving and been subject to the most minute scrutiny by television critics, writers, psychologists, addiction experts, and dramatists ever since the show first aired back in 2008. It has more than simply caused a sensation. It is actually regarded as probably one of the greatest shows ever to air on television.Its premise is beyond horrible. It charts the demise of its main character, Walter White, an overqualified and deeply frustrated high school chemistry teacher, into one of the kingpins of the Crystal Meth drug distribution networks around Albuquerque New Mexico, home of the vicious brutal cartels that supply the USA. Walter White aka ‘Heisenberg’ is what’s known as a ‘cook’. In other words he turns his skills as an exceptionally gifted chemist into making the finest Crystal Meth either a pusher or a user can buy.

Discovering he has only two years to live with incurable lung cancer, stage 3A, which means it has moved to the lymph nodes, White turns to drug manufacture to ventilate his rage and frustration at his mediocre lot in life. He is 50, frustrated and underachieving in life. He has a surprise new baby on the way and has a son whom he loves deeply with Cerebral Palsy. White earns $46k  p.a. in his teaching job. He also has to supplement his income working at a car wash, run by Bogdon, a deeply unpleasant bullying boss.

As if things cant get worse, we have the question of Walters personality. Walt is not a wise humble balanced guy who, discovering his illness, realizes that despite the fact he is going to die that he has a loving wife and family. He is a bitter frustrated resentful man. He has wasted his mind. Moreover he feels cheated by his best friend, Eliot and Gretchen Schwartz. Decades before he and his friend Eliot Schwartz were once in a small chemical start up company called Gray Matter. Gretchen was Walt’s Girlfriend, but she left him for Eliot. Walt, devastated, sold his share in the company that he had contributed so brilliantly to for a pittance – $5k. (To get an idea of how brilliant Walter White is,on his wall approximately 5 minutes into Episode 1, Season 1, we see Walter White is a recipient of the Nobel prize). Twenty years later Eliot and Gretchen are married, and Gray Matter is worth $2 billion. Much of that had to do with Walters contributions and breakthroughs. White is bitterly resentful of this and checks how Gray matter is doing each week in the news business sections. 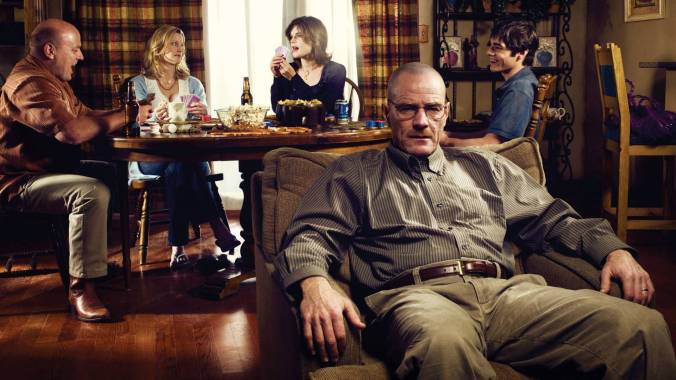 He refuses Eliot Schwartz’s offer of payment for chemotherapy and, along with a former high school pupil of his, the delinquent very unreliable addicted child of respectable middle class parents, Jesse Pinkman, begins to cook Meth. Soon because of his extraordinary talents as a chemist, he begins to make the finest Crystal Meth either the local DEA or indeed the local mehthead population has ever seen. Walter is also a gifted and ruthless businessman, dispatching opposition and killing those who threaten him with skill, and a cold remorselessness that grows increasingly disturbing as one watches. This of course is not the story of some everyman. Walter White is no everyman. He is brilliant, egotistical, ruthless, logical, and a killer right down to the soles of his shoes. And he makes the finest meth in New Mexico. Thought his might be an attempt to describe the capacities we all might have in us to be evil, and perhaps if we had Walt’s ego and abilities, had had been slighted and disappointed in life as Walter White had been, perhaps, just perhaps we might find ourselves in not dissimilar circumstances. For the most part though Breaking Bad is so far fetched to be surreal, and yet its surreality lends itself to the fascination of the story of the high school teacher who goes to the dark side. The sheer alien territory of the New Mexico landscapes also helps, the endless stretches of desert, the murderous drug gangs decimating one another for the easy hyper profits available for drugs that because they have been prohibited have become the purview of criminals. This, along with a slow steady build-up to one of the most anticipated and horrifying endings to a series ever, lends one to ask the question what is this show about?

Money? Well, in a word, no. Walter makes vast sums of money. But he enjoys the power and the challenge of eluding detection more than money. Breaking Bad is not about morality either. Its about amorality. Its about the lunacy of prohibition that has never worked and will never work. Its about vast sums of money, unbelievable amounts, that bring power into the hands of very very bad people. Its about the thin patina of civilization and conventionality that covers over our human capacity for greed, murder and revenge. It is a vicious satire of capitalism and market economy gone mad. Everyone is destroyed by Walter Whites monumental desire for power and revenge and in many ways he is part of another economy, the drug economy, with its supply chains and its accountants and economists and entrepreneurs. The problem with Walter is that he disrupts everything. He inevitably finds a way to completely wreck every well crafted operation he finds himself in because he is driven by this desire to get to the top. Planes Fall from the Sky. Children are poisoned. Lovers are allowed to choke to death. Prisoners are executed in their cells. Drug Bosses get their heads blown half off. He doesn’t care. After all he is going to be dead soon. All Walt wants is the ultimate revenge. He wants to be king. As Walter says to Skyler his wife: “I am not in danger. I am the danger.”

What is horrifying is not the carnage that goes on in the drug world. We are used to that. What’s horrible and funny and fascinating about Breaking Bad is how Walter White, apparently the nicest of men, could be so much worse than any of them.