A fascinating piece of installation art we came across in a corner in Wroclaw. The statuary actually dissolves into the ground and emerges across the street. Arresting. Beautiful. 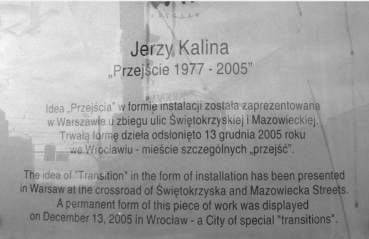 It took twelve hours to get to Karpacz, three hours by plane to Wroclaw and nine by bus, mainly due to connections not arriving and many waits. I travelled light. One bag, and, despite my loathing of anything to do with Ryanair, the flight was flawless, and we arrived fifteen minutes early. Of course there was one less than minor irritation. Ryanair took ten euros as a penalty charge for two fellow travellers who did not check in. Why? No idea. Me? I travel light – one small bag, books, unsuitable shoes that by now because, of all the hours and hours of trekking and climbing are in shreds, and my notebooks and pens (can’t do without them). Also, I am wearing a borrowed coat because, yes, I lost my coat. Travelling is tiring. Some of the bus stations we stopped in were simply horrible – grim soulless post communist functional affairs devoid of warmth or light with equally grey grim looking people, young and old who didn’t talk to each other and filed silently onto the bus that is when it finally arrived, swinging into the station, mounting the footpath and then hopping back down on the tarmac as the doors swung open. Other stations were brighter and more modern and better organized. Overall the trip was, despite its extraordinary length, pleasant. People sat quietly, talked quietly into mobile phones, and left the transport in a neat orderly fashion. There is an ethos of orderliness, thrift, respect for authority and tradition, an anxiety about the future and search for security, a reluctance to take unnecessary risks, a wearing of sensible shoes and warm jackets, an impetus to settle down and make ends meet. I find Poles in Poland an intelligent, realistic, thoughtful, pessimistic, unhappy, deeply independent, terribly anxious people. Compared to how warm and  friendly and open I find Poles in Ireland, with a few notable exceptions (friends and acquaintances I met and socialized with whom I found utterly delightful), Poles in Poland are unfriendly and hostile, offputtingly depressingly so.  In a restaurant or huge shopping mall in Wroclaw there is a marked tendency to not look one another in the eye, or greet each other, or perhaps one could define the tendency is to walk past each other as if the other person is simply not there. if you buy something, change is not handed to to you directly, rather it is put on a tray between you and the service person, who does not look directly at you. I greeted someone in a lift who smiled at me, and honestly thought I was going to be attacked by her partner. As someone who has gotten into trouble for being somewhat over friendly, seeing this first hand is rather a surreal experience for me. Their anxieties over a great country’s troubled history and the enormous pride in Poland show in their faces and their endless concerns over protecting their futures and their own patch of turf seems a little too paramount and shows up in little ways – for instance television stations advertise more vitamin supplements and various forms of pain killers and drugs that would keep any virus in mortal fear of its existence. I am reminded how the Mayor of Paris told Parisians to be nicer to visitors some years back. Poles should take the lead from Paris’ experience. They too are a great hearted people. I was waiting outside a shop in Karpacz in Poland on the afternoon of Day four, and, as I was getting tired and a bit disoriented (I had a cough and temperature), I didn’t see the long black haired, wide-shouldered short stocky man walk towards me. He bounced off my shoulder and, as he nearly fell, I caught him and gave him a hug and apologised loudly in English for being such a twit. He grinned sheepishly at me, and, as he was rather drunk, began talking to me in polish. I don’t in the least look Polish, and it was pretty clear neither of us came from this country. I shrugged my shoulders and said something akin to ‘non polska’ which only served to widen his sheepish grin. He sat down beside me, and, in broken English told me he came from Peru, that his wife was Polish, that he was too drunk to drive, and that he was going to be in so much trouble when he got home. Then, shaking my hand and hugging me once more, he invited me for a beer sometime and when I said I did not partake of alcohol, he seemed quite disappointed. He wobbled off, and I wondered how someone like that got to live here, deep in southern Poland, high in the forested mountains, in the midst of the Polish National forest, surrounded by tall pointed dwellings with specially fitted snow protectors on the roofs, dwellings with double windows and piles and piles of carefully cut logs outside and inside. Here in winter the snow reaches three metres high and everyone skis and ice skates and toboggans. The area around Karpacz is gorgeous, mesmerizingly so, with vast sweeping silent forests that are hauntingly beautiful, with streams and old bridges and clefts and gulleys and huge knotted roots that reach up and dive down and reach up again and choke the ground so much you fear the roots are coming to get you like something out of Wyndham’s Day of the Triffids – this is  more the stuff of fairy tales than anything one can fix in twenty-first century life.  On day three I went mushroom picking and came home with a basket of weird reddish brown mushroom monstrosities that I was assured were very tasty indeed. They looked beautiful but I had never eaten such things before. So the monster mushrooms were cooked twice, sliced, and cooked with dill and cream – and made an amazingly delicious sauce that kept for days. 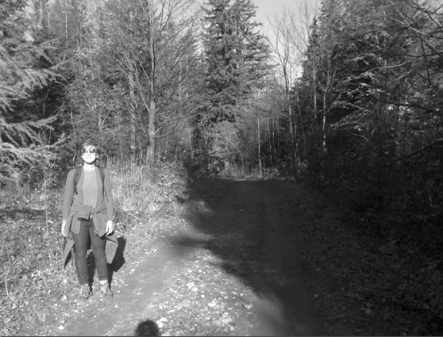 zabela Cwiszewska – who dislikes being photographed on forest trails. That’s my big head shadowed in the left foreground.

This place, Karpacz, is about the forest, for the forest surrounds, contains and completes this world. And this is a world older than imagination, and once one hears the forest’s  voice, once one sees the expanse of hills, once one understands the eternal silence of the forests, one knows there is no music like it. Compared to it the sound of the city is a torture and a dissonance that can only be endured for a while and one simply has to get back here or somewhere like it. We travelled up into the mountains, up a trail deep into the forest into the Czech Republic, to stay in a wooden hostel by a lake way above the forest line. 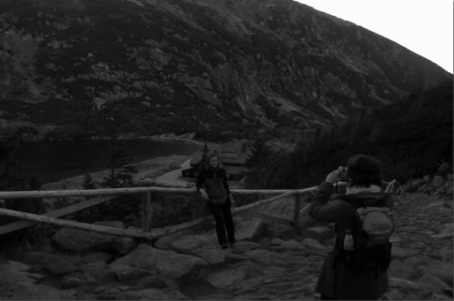 Izabela taking a photograph of Mirela – whom we met by accident and who very kindly directed us to the lodge we stayed in when we got a tad misdirected. The lodge structure is to Mirela’s elbow. Note the lake and the hills in the background. Those sheer structures cause avalanches that killed quite a few people over the years. As a result the trail we took back to Karpacz is closed during winter.

As we travelled all day the trees got smaller and smaller, until all one was left with was a denuded proto artic landscape with ultra bright sun and piles of rocks and gorse like bushes and tiny trees stretching out onto undulating hills with patches of grey and green and a wide expanse of  mountains below with hundreds and hundreds of acres of forests with bald patches where the trees had died or were dying or had been cut away for fuel. In between the forest were houses and Karpacz and roads and places where roads were being built and rebuilt, and of course so many hotels and ski resorts.

High Tundra Trail. Everything in the background is forest below you -as far back as you can see –for miles and miles and…

Before I came here I dug out some books about Poland from Dublin Public Library before departing on my trip, particularly Adam Zamoyski’s ‘Poland – A History’ which is a marvellous read. I am reading about the rather shocking era of the 1790’s where Poland as a national entity doesn’t actually exist, a horrifying experience for such a proud and brilliantly accomplished independent people, a dismembered commonwealth that was not in any way helped by the ruthless Bonaparte, who used the Polish Legions to further his own ends without in any way helping restore the commonwealth. (Those Polish soldiers actually saved his life at one stage.) More bits and pieces of history protrude in the region. I saw a hill with a rather shady looking building that was pointed out to me known as Goering’s Hill – a place completely fenced off and, yes, you guessed it – supposedly a dwelling house for the delightful Nazi himself. Hermann Goering. There is no mention of this place anywhere on the internet, yet there it was. I was left wondering what this strange half hidden building on that forested hill was really used for. Then I went for a meal in large rather conventionally built (so I was told) restaurant filled with animal pelts, a rather disturbing huge stuffed deer in the middle of the room  in the pose of calling out, toboggans carefully placed of maximum visibility, a roaring fire, and great glass jars of preserved fruits and vegetables equally placed for maximum visibility. Very touristy I was told. Its the economy, stupid, I told myself. Karpacz is filled with hotels great and small, some in the process of being rebuilt, and despite this the place is still real enough and inexpensive enough to give you a memorable visit. Yes, I know I am sounding like an advertisement here. I really don’t care. Check it out.